New York - Make your electoral vote count! (California, you too)

New York and California - this one is for you!

Election after election, we hear about how our votes don't count.  The heavily populated areas (New York City, for example) far outweight the votes from the rest of the state.  For example, take a look at New York, below.  A pretty big part of the state votes Republican, while less area (but more people) lean Democrat.

For those that are unaware, there are currently two states that do not use this method. Nebraska and Maine divide them up differently.  While the federal government allocates the electoral votes to the states based on the number of congresspeople the state has representing it.  It is up to the states to determine how to allocate them.

While many are advocating for divinding New York into three seperate states, or autonomous regions, it may be an easier puss for now to get a bill started to more fairly divide up the electoral votes.  Long Island and Upstate counties are tired of the NYC votes outweighing us.

Yes, I totally get that the current political environment is unlikely to work with us to make this change. The arty in power would be losing some of that power when it comes to presidential elections.  But, they work for us. We put them in office, and if they don't have our interest in mind, we are the ones that can take them out of office.

So, where do we start?  The first step, talk about it.  Get the word out.  Reach out to your NY State Senators and Assemblyperson.  Links are below to make it easy.  All their contact informatoin is there.  Email them, call them, write to them.   Take five minutes and write them quick and let's start making our votes count!

Whenever this comes up a lot of people say that it doesn't matter, we will never be properly represented .  If we continue with that attitude, correct. However, if we speak up, and act, we can make a change. It won't be fast. It won't be easy. But if recent years have taught us anything is that nothing is truly impossible and if we stick together, we CAN change things.

I was recently doing some maintenance on my ADSB reciever and took a look at recent performance graphs.

I knew the flights have been a lot less since COVID-19 restrictions went into place but did not realize how drastic it was.  Where I am there are a large number of internation flights passsing by so I guess it shoud have been expected.. 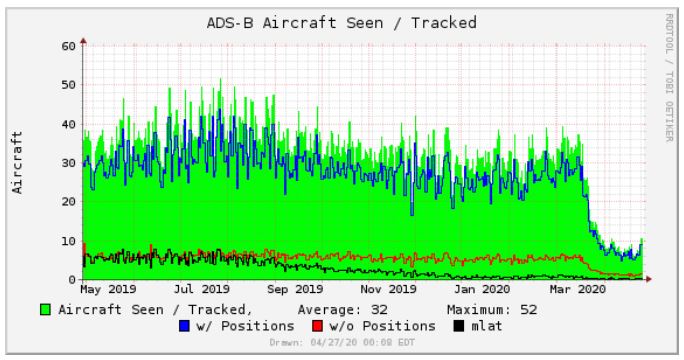 You can view the live data here at http://piaware.mas321.com

I have an older Grand Cherokee with the SKIM keys, chip keys or whatever else you know them as. The ones the dealer charges a bunch for. To make it worse, I have just one key.  I needed a second. Wanted a second. Didnt have it in the budget.   Once day I came across software that looked like it would do it while looking for something else. Appcar DiagFCA.

I bought it for diagnostics, and at the time the SKIM programming was in the future. Today it paid for utself many times over.   I bought a cheap key blank (AliExpress, $20, cut and delivered, with keyless entry fob and all) and gave it a shot.  First time around it did not take but the second time was flawless.  To be fair, the SKIM/RKE programming is still a beta feature. But overall very happy.  Software, key, total invested was under $70 and I have very well featured diagnostics as well.

One of these days I will sit down and make a good video with more of the features - but for now here is a clip of me programming a new key, at home, in my driveway.    All you need is the software, an OBD2 bluetooth or USB adapter and laptop.

Bonuses for me, I enabled the tilt mirrors on reverse and DRL options!

As you can see - it took a couple minutes to cycle through but quick, easy, and best of all, no dealership prices! Don't get me wrong, dealer service has it's place and purpose, but being technical and doing things on my own, this was a no brainer.

Easily save 15-20 cents per gallon on gas

Do you want to pay less for gas? Of course we all do.  I have two apps I use and am saving anywhere from 15 to 20 cents per gallon, every time.  Sometimes more, sometimes less, but usually in that range.  It doesn't sound like much, but if you drive a lot, it adds up.   I am up to over $50 that I have saved. Use the links below and get a bonus discount the first time, too!

I mentioned two apps.  The first is Upside  When you click on this link it will take you to their page. (Not on your phone? It will text you a link)  Upside works with gas stations all over the place.  You find a participating station near you, claim your discount and use credit/debit. Upload your reciept after getting gas and within a day or two they credit your account for the savings.

The second is more a feature than an app - Gasbuddy payment card.   An extra 5c/gallon every time, not a rebate, comes right off the price before they debit you.  Accepted all over the place and works like a debit card - link to your checking and it debits your account the following day. I have been using it for a while and it is a great deal.  Click here to visit their site.

What I do is this - find a deal in the Upside app and claim it.  Get my gas and pay with the Gasbuddy card I have.  Instantly get the Gasbuddy 5 cents off, and next day I get my cash back from Upside,  Simple!  And cash in your pocket!

We recently ran across this and searching did not give us too many good answers.

Problem - User was moved to a new computer. In our case, they were migrated from Windows 7 to Windows 10, and prior to the move ha configured multiple scanning profiles on Windows 7. They had anumber of document types they scanned and had then each configure with the optimum scanning options.  This was in the built in windows fax /scan center, nt a scanner app.  (Not the HP / fujitsu scanner application)

We ended up logging everything while we created a new scannig profile.  The user created ones are in a folder that does not appear until that user has created one - so while we were looking in the right place, it wasn't there yet - at the time the user old computer was not available

In there you will (or should) see a bunch of .XML files, one for each profile the user has created.  Copy this folder to their new machine and they should be good.

This appears to be the location on at least Windows 7 and Windows 10.    We did not try it when changing scanners, just when moving to a ne computer.  It may be relevant that we do not migrate user data typically. This is a corporate environment where saving locally is highly discouraged, so this was done as an exception.

For whatever reason it took us longer than we thought it would to find this..  This should also work to share scanning profiles between multiple user - either user by user or possibly in the public (or default) profile.